I wonder how many of you were looking forward to this announcement.

I’ve recently been reading ‘The Lean Startup’, by Eric Ries. It has really inspired me and empowered me to go on with the project. Not only to go on with it, but to achieve success even though my resources are limited and my direction is rather cloudy.

Some data about the game: Kipos has over 80,000 downloads and even after almost two years without a single update it still has around 300 bootups per day. And I still get wonderful reviews by people who are new to the game, or who have been playing since it was released in 2012. I’m very grateful.

I’m also focused now on simplifying the features to the basics, effectively reducing the feedback loop for the direction of the game. In other words, I will be able to send updates to you (the betatesters) more frequently, and thanks to your feedback and game data I will be able to find out faster what is best for the game.

So, if you are excited about seeing where Kipos is heading, I suggest you sign up for Kipos’ newsletter on the form below. I will also send a betatester invitation the week before the beta release on March 31st 2015. I will also try to post more frequently, at least once every other week.

If you have any question, doubt, or you just want to show me your excitement, leave a comment below. It really means a lot. I’m looking forward to see you soon! :)

Subscribe to Kipos' Newsletter and become a Kipos 2.0 BetaTester!

Hi! I wanted to let you know what my plans are for Kipos. This involves unveiling the big surprise I have for the game, and news you are probably interested to hear.

For several months I’ve tried to gather a team and organise a crowdfunding campaign for Kipos. This was in order to fund the project and to be able to develop it further. However, I failed at finding a 2D/3D Artist, since most wanted to be paid ahead, or they were busy. And the only budget I have for the game is the one I would get from the crowdfunding, so there is no way I could pay them upfront.

Therefore, the only choice available is to develop the whole game on my own, which is actually what I have been trying to do so far (except for the music).

Problem: I don’t have enough free time to develop the whole game on my own. :(

Solution: Be able to stop working as a freelancer to work on Kipos.

How am I going to do that? Creating a crowdfunding campaign so that fans and people get perks while helping the development of the game!

Everything about the full version of the game will be revealed in the video for the presention of the crowdfunding campaign. Here are some things I can share with you for now:

· I’m aiming to release the game for the following platforms: iOS, Android, OUYA and Steam.

· Coins will be only obtained via playing minigames (both singleplayer and multiplayer), completing missions, etc.

· There will be a special kind of currency that will only be obtained via winning competitions, tournaments, and special events.

· I dislike pay-to-win, so it’s something you will never see in Kipos.

I’m currently working on a big project, so I won’t be able to organise/launch the crowdfunding campaign until I finish the work, which will be around October-November.

I will also make (at least) one more update to Kipos for iOS. Sleep bugs in certain cases, need bubbles bug when they start sleeping. I also want to add Cloud Syncing, so that you can play with the same garden in different devices, and a feature to exchange Kipos with your friends.

That’s all for now.

Hi, thanks for all the reports submitted these days!

Once I know X bug, all the other reports mentioning it don’t help much, and I can’t spend too much time replying instead of working. From now on, I will only reply to those I haven’t commented about in this blog, so I don’t really need more reports about the following bugs:

2. Bugs about FoodBowls becoming unassigned, and any other bugs involving FoodBowls.

About bug 1: If you close the app while your Kipos are sleeping, they will stop sleeping. If while the app is closed they start to sleep by themselves (when their energy reaches 0), they will sleep for 6h.

About bug 2: Don’t pay attention to the FoodBowl’s tooltip, what matters is the Kipo’s Info Panel. If the FoodBowl doesn’t have the same color as the Kipo, try unassigning and assigning again.

About bug 3: This is something I’m currently working on, it’s not finished.

Thanks for the feedback, I hope you are having a great summer! :) And thanks for the fantastic reviews and the support via the StarterPacks! :)

I was looking forward to this day for a long time.

Even thought I knew this version had bugs, it is playable (at least I’ve been able to play it without problems), I just wanted to release the new features that had been waiting in my Xcode project for some months.

– Kipos might stop sleeping if the app is closed completely (with the X in the task manager) or if shut down by iOS.

– When loading the game, if Kipos were sleeping, they might fail to set their sprite to the sleeping one.

Enjoy the new features, and let me know if anything goes wrong! :)

I just submitted Kipos 1.4.5 to the App Store, and it is now waiting for review. Usually it takes one week for it to get reviewed. So, if there isn’t any complain by Apple about the update, it should be on the App Store soon. Here’s the change log:

Thanks for your patience! Here’s the update:

– You can choose any color for your Kipos with the new Color Picker, even for your existing Kipos. And doing so doesn’t cost any coins.

– New Report Bug panel. Your save data is also sent to me. This will help me debugging bugs.

– A brand new Creature Info Panel. You are going to love it. :)

– You can now set your creatures to sleep during X hours.

– Kipos needs’ adjustments and bug fixes. Their stats will not decrease so fast, but they will still interact as much, even if they don’t really need to satisfy a need.

– Fences are now untouchable, so objects near them are easier to select.

– Kipos have dream bubbles. You can send me drawings, and they might become Kipos’ dreams in future versions. :)

– You can listen to your own music while playing Kipos; your music will not stop playing when opening Kipos.

– Kipos Lobby: an online garden you can visit with one of your Kipos. You can chat and play minigames with other people connected to the garden.

– Food Bowls change their color to their assigned Kipo.

– Added a new ads system: Chartboost. Users who have the StarterPack won’t see the ads.

– Usability improvements for Voice Over users, such as an – AutoPlace button.

If you enjoy the game, please, consider supporting it via getting an StarterPack! :) 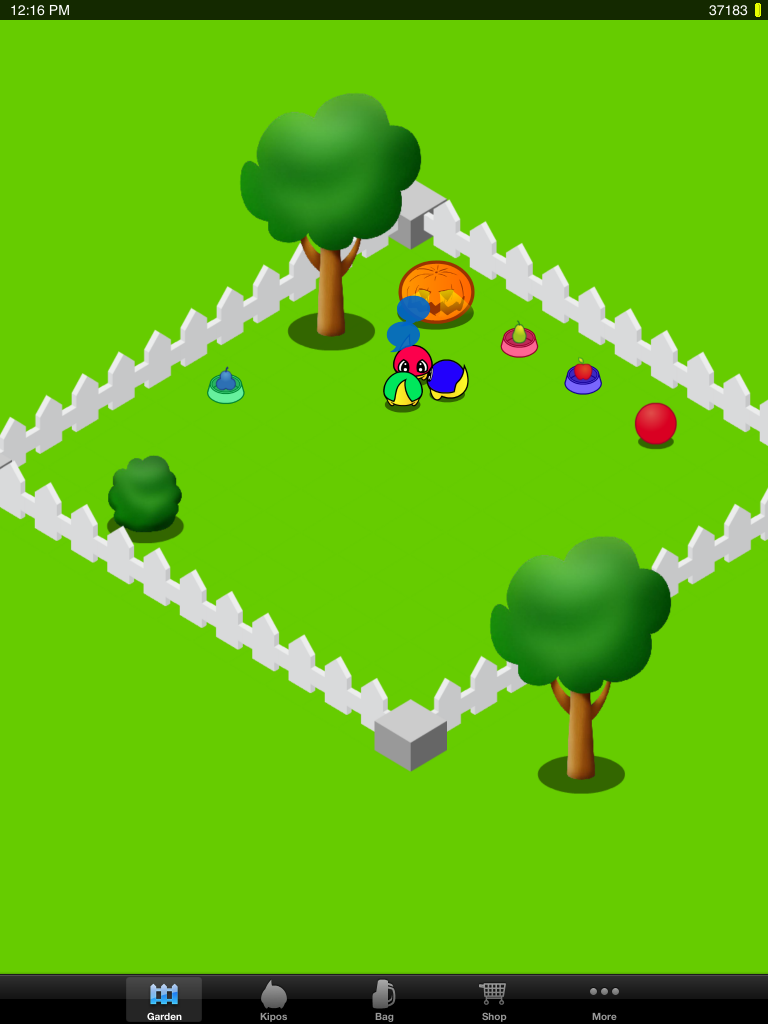